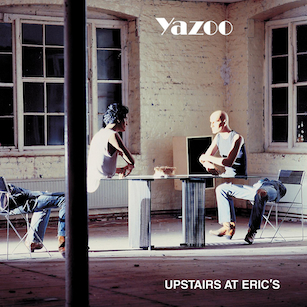 Did some blogging in the morning about some of the experimentation I did over the weekend getting my classic gaming streaming rig in order, and figured it would be fun to stream an album on #ds106radio. I spent some time this weekend cleaning up some vinyl I had bought in Trento that was pretty beat up, and Yaz’s Upstairs at Eric‘s sounded much better than when I bought it last year. Still not perfect, but a thorough cleaning definitely made a difference.

I loved this album as a love-struck teenager, and I thought it was the height of experimentation. Plus, Allison Moyet’s voice is hard to deny. This is a European pressing so it has the song “Tuesday” on side 2, which is not on US and Canadian versions. Those versions have “Situation” which was their single in North America, and I learned when doing this vinylcast that Yaz did not want to have Situation put forth by the label as their North American single.