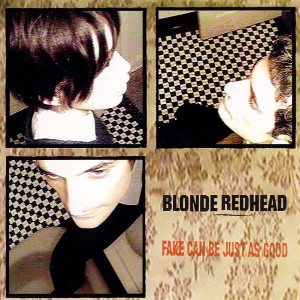 vinylcast #32: Blonde Redhead’s Fake Can Be Just as Good

I got this vinyl delivered to Italy recently, I had god memories of it when I owned it on CD, and I have been in a 90s state-of-mind on ds106radio these days. Blonde Redhead was a favorite band of mine during the mid 90s. I first heard their second album La Mia Vita Violenta (on Smells Like Records not Matador Records like I said) and was immediately blown away by their melodic duets set against their noise-driven music. Fake Can be Just as Good is their third album, and they recruited Vern Rumsey of Unwound fame to record with them, and his bass style is hard too miss.*

And while Side 1 was good, side 2 of this album is amazing. From “Bipolar” to “Pier Paolo” to “Oh James” to “Futurism vs Passéism” is all but perfect. Every song works together and they all build up to an instrumental that is probably their best.

The ds106radio stream, on the other hand, was a mess. It was interrupted by an electrician who turned off power to the wifi, and I was offline for a bit. After that, it was on and off given I was tethering off the phone. Timing is everything, but luckily the recording is solid, and given nobody’s listening, I think it is safe to see people got their money’s worth 🙂