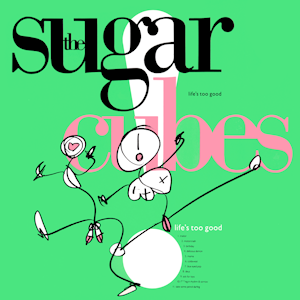 vinylcast #18: The Sugarcubes’ Life’s Too Good

https://twitter.com/jimgroom/status/1246028002154201089
The Jim & Anto Show: Lockdown Radio has become almost regular at this point, and we are having fun doing it. Today we discussed schooling under lockdown, re-wilding bears and wolves in Trentino, creativity, American candy, and more.

After that I played an old favorite from the 1980s, the Sugarcubes’ 1988 hit album Life’s Too Good:

The band received critical and popular acclaim internationally. Their debut studio album, Life’s Too Good, was released in April 1988 to unexpected international success. It is credited as the first Icelandic album to have a worldwide impact and is considered a definite influence on all subsequent Icelandic popular music.

It made me think of my boyhood radio stations like WLIR and WDRE where I was first turned onto the European New Wave scene, along with the rest of American. WLIR was a Hempstead, Long Island based radio station that both New Wave and Rap got an early start on the airwaves, particularly U2 and Public Enemy (which was from Hempstead).

As a 16 year old on Long Island, the perverse European artsiness of this album was not lost on me. I never looked at circumcision, cats or birthdays the same way again! #ds106radio pic.twitter.com/V5e2eOKGtT

It was not a very well contextualized #vinylcast given the Jim & Anto show ran long, and I did not even do the basics of reading the Wikipedia article, cause if I had I would have known Bjork was in bands since she was 11! But that’s what happens when you are an amateur and you are scrambling for lunch between sides, but it was a real fun day on the #ds106radio.